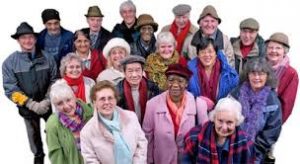 This book is not centrally about death, dying or hospice. It is about stories that I made into written memoirs for ordinary people. And while the people are ordinary—running the gamut from prep cook to children’s optometrist and from housewife to evangelical minister—their stores are anything but.

Each chapter in Paths of Heart—Writing Stories Told at Life’s End  centers on one  person, the stories they told me, and what we all could learn from them. No celebrities. No decorated heroes. Just everyman. And the stories themselves are the amazingly unique stories lived by normal people.

That each storyteller was in the care of a hospice is not central to any of the stories they told me, or to the heightened understanding I took from them, for that matter. But having said that, I, as a volunteer for the Good Samaritan Hospice service, would never have encountered either the people in the chapters of this book or the stories I helped them to write where they not dying.

Now, to be sure, hospice is a big part of this book, even though the stores that I wrote for patients are not about hospice care in any explicit way.

I say “explicit” because the important thing concerning hospice as it affected the writing of this book is that because the storytellers were in hospice care they were at ease and relaxed enough to work with me in capturing and writing their stories. But make no mistake: Each person in the chapters of this book is dying and they know they are dying. Yet none of them were fraught with anxiety, dread or nervous apprehension.

Is that off-putting to you? The dying part, I mean? If so, perhaps you should browse the hospice section of this web site a bit. Not to convince you that dying is a good thing. Just to show you that dying is a natural and normal thing. And that hospice can ease the way for both the dying and those they will leave behind.

Giving it a little thought to hospice and the need for it might serve you well, since you will be needing it yourself one day.