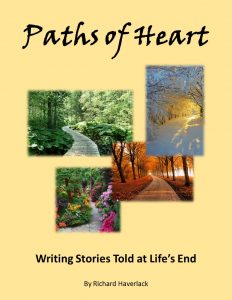 As a volunteer for the Good Samaritan Hospice since 2007, Richard Haverlack has been capturing and writing memoirs of men and women nearing death. His book, Paths of Heart—Writing Stories Told at Life’s End  is about the adventures he’s had in doing this work as well as how he came to be doing it in the first place.

Paths of Heart—Writing Stories Told at Life’s End is the archetypal “hero’s journey” to epiphany as lived by the author. For his terminally ill uncle he came to desperately need hospice, then understand it in the context of our culture, and finally to embrace it fully through volunteering. As a result he has been writing memoirs for hospice patients since 2007, and six of his intensive experiences and their impact on him are sub-stories detailed in the book.

Paths of Heart is a journey to enlightenment and each partner’s tale is itself a journey of coming to a particularly valuable facet of understanding to further the journey at large.

The book opens with this epigraph:

For me there is only traveling on paths that have heart, on any path that may have heart.

There I travel, and the only worthwhile challenge is to traverse its full length.

And there I travel, looking, looking breathlessly.

In writing the book, Richard has three objectives. He wants to evangelize hospice to others so that they might avoid what he had to endure by learning of it before inevitable circumstances demand it. Additionally, he wants to show that others, too, can capture the stories of people who will otherwise take those stories to their graves. And finally, he would like to provide financial benefit to the Good Samaritan Hospice to which he has an immeasurable debt for allowing him do incredibly rewarding writing that has no parallel.

A Writing Partner’s Tale: Epiphany
A simple man of the earth shares his story of how to reliably have epiphany after epiphany.

A Writing Partner’s Tale: Bliss
A delightfully clear and lucid 106-year old woman, shows what is truly important in life–after loosing it herself.

A Writing Partner’s Tale: Opportunity
An “average Joe” drafted into a non-combat support role in World War Two becomes one of the fastest men in the world, among other unique happenings.

A Writing Partner’s Tale: Courage
A man in the last stages of ALS, (Lou Gehrig’s Disease) shows one way to successfully deal with the approach of one’s own death.

A Writing Partner’s Tale: Listening
A lifelong special education teacher, with considerable skill in educating children with mental disability, turns the interview’s tables on the writer.

A Writing Partner’s Tale: Pain
Voluntarily given up to an orphanage at age two, a hardened woman softens at life’s end thanking the author for “…saying what I couldn’t” in her story.

The  Journey stories–a path of heart–cover more than a decade and chronicle  how the author came to be doing this insightful and poignant work in the first place. They begin with the death of his father, then move on to his guardianship of a hospitalized uncle, through hospice advocacy speaking, and finally come to his writing the stories of hospice patients.

His experiences in writing just six of those patient stories–six more paths of heart–lie in the tales above.

Click here to see readers’ comments about the book.

Click here to visit the author’s page, read a little of the book, and get ordering information.